Breathing is important because your body needs the oxygen in the air you breathe to create the energy that keeps you alive.
When fresh air is breathed in through the nose and mouth, it is pulled through the windpipe or trachea and into the lungs. (You have two lungs, with the right lung being slightly larger than the left lung.) From the windpipe, the air moves through two large passageways, called the bronchi. A complex system of much smaller tubes or bronchioles branch out from your bronchi to carry oxygen to the “working parts” of the lungs — the millions of air sacs or alveoli. These small sacs (like tiny folded balloons) have very thin walls that are full of blood vessels. The walls are so thin that the oxygen in the air can pass through them to enter your bloodstream and travel to cells in all parts of your body. 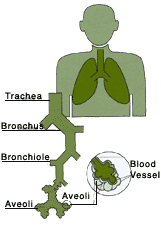