Test Your Lungs – Know Your Numbers

Spirometry measures air flow out of your lungs (FEV1) along with lung volume (FVC). These are the numbers you need to know. These noninvasive tests can be done in the physician’s office with a spirometer, a device used to measure lung health. 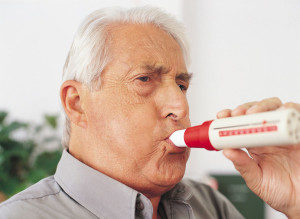 Blowing forcefully into the tube provides a quick, easy measure of both FEV1 and FVC. A photo of a patient performing a spirometry test is shown here.

To measure your FEV1 and FVC, you will be asked to hold the tube of a spirometer in your mouth, inhale as much air as possible, then exhale forcefully into the spirometer for six seconds or more.

You will be asked to repeat the test several times so that your maximum values for  FEV1 and FVC can be recorded. Your measured values are then compared to the predicted values from healthy subjects to determine if you have airway obstruction, and if so, how severe the obstruction may be. You may also be asked to inhale a bronchodilator and repeat the spirometry measurements to assess whether your airway obstruction is reversible.

Spirometry is the accepted standard for assessing whether airway obstruction is present, as well as for gauging its severity[1].  Spirometric measurements that are required include the FEV1, FVC and the ratio of these two values, the FEV1/FVC.  Some spirometers provide measurement of the FEV6 as a surrogate for the FVC, in which case the FEV1/FEV6 ratio is reported.   Most spirometers can report additional variables such as PEF (peak expiratory flow) and FEF25-75% but these are not required to make the diagnosis of airway obstruction.

All spirometers should meet or exceed the minimum requirements published by the American Thoracic Society and European Respiratory Society (ATS/ERS)[2].  In addition to meeting the accuracy and precision guidelines of the ATS/ERS, spirometers should be easily configurable by the user to provide reports that include the patient’s FEV1, FVC and FEV1/FVC ratio (or FEV1/FEV6 ratio if applicable).  In addition to the measured values, each spirometer should provide functionality to display the predicted value or predicted range to assist in identifying abnormal lung function, particularly airway obstruction.  The ATS/ERS guidelines recommend using the lower limit of normal (LLN based on the 95th percentile for healthy never-smokers) to establish a diagnosis of obstruction, so spirometers should provide these values as well[3].  Spirometers for use in the U.S. should utilize the NHANES III reference equations which include predicted and LLN values for the parameters noted above 3.  Additional reference equations for subjects 3-95 years of age of various ethnicities are available from the Global Lungs Initiative (GLI)[4].  Spirometers should be able to record pre- and post-bronchodilator spirometry, and display the % change after bronchodilator as part of the report.  Most spirometers require calibration for each day they are used; a 3 liter syringe is the standard device for calibration recommended by the ATS/ERS guidelines.  Some portable spirometers use disposable flow sensors which are calibrated at the time of manufacture.  A method of checking the accuracy of these types of spirometers is recommended by NLHEP.

Prior to 2009, NLHEP offered a formal spirometer review, but this program has been discontinued.  Table 1 lists spirometers that achieved recommended status under the review program.

Although spirometry is a relatively simple test to perform, it is largely dependent on patient effort.  Acceptability and repeatability criteria have been published by the ATS/ERS2:

Screening to “rule out” significant airway obstruction combines a simple questionnaire with measurement of either FEV1 or PEF (peak expiratory flow)[5],[6].  Subjects with significant risk factors may perform a series of maximal expiratory effort to obtain FEV1 or PEF using a small portable device.  If the measured FEV1 or PEF is within normal limits for the subject’s age, gender, height and ethnicity, airway obstruction is unlikely.  If the measured variables are NOT within normal limits or the subject is unable to perform the maneuvers acceptably, he/she should be referred for formal spirometry with pre- and post-bronchodilator measurements.